Eric Wowoh is a former Liberian Refugee. In 2006, the U.S. Government, through a refugee resettlement program, brought Eric to America. During the Liberian civil war in 1990, Eric was captured as a child by rebels, beaten, tortured and left to die. Miraculously, he escaped to exile. Eric spent 14 years living in refugee camps. In 2002, around age 23, Eric was donated a computer by a kind of his. He learned how to use the computer and began training other refugees from all over the continent of Africa. Eric has impacted the lives of many across the world and established Change Agent Network from the origins of that single desktop computer. 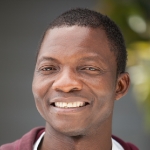